Dexter Ward, named after the novel by metal’s second-favourite literary benefactor (that would be Lovecraft), are a Greek heavy metal band formed within the last decade who have just released their second full-length album. The album is a pastiche of war stories, told from various perspectives and in various times, and not limited to the past either. From the ancient story of the “Stone Age Warriors” up through the “Ballad of the Green Berets” we are given a series of epic and fantastic tales told by the victors themselves. And you’d think with this kind of subject matter, you would expect something a little more than just run-of-the-mill heavy metal. Fortunately, Dexter Ward certainly deliver on this count.  END_OF_DOCUMENT_TOKEN_TO_BE_REPLACED

Hitten are a more recent heavy metal band from Murcia and State of Shock is their second full-length album coming out just a couple years after their first. I had known about Hitten for a while, but had never bothered to listen to anything by them until a respected friend mentioned how much he enjoyed this particular release and so I went to pick it up. It took less than a minute into the album before I had to pick my jaw up off the floor after hearing the insane intro. Sometimes intros can be deceiving though, so I suspended any judgement until I had listened to the whole thing all the way through.  END_OF_DOCUMENT_TOKEN_TO_BE_REPLACED

Karmøygeddon has become a staple in the Norwegian metal scene by now, arranged every year since 2004 with big bands such as Behemoth, Hammerfall, Helloween and Paradise Lost as previous headliners. Its as close to local as possible for me, with only a ten-minute drive from my hometown to the city of Kopervik in western Norway. I’ve been going since 2011, this means this year was my sixth year in a row attending. There were twenty-nine bands in total playing, some as far as possible away from my preference, so the review will only be of the bands I saw. Also, my memory of the last couple of bands on each day may be a bit hazy considering there was beer, and a lot of it, involved.

END_OF_DOCUMENT_TOKEN_TO_BE_REPLACED

For all the European power metal I used to listen to, it’s rarely if ever my first choice any more. It’s not that it can’t be done well or that the genre is without merit, but rather that my tastes have changed over the years, and I find myself a bit put off by the overly clean production that is all too common whilst leaning toward the grittier side of metal. But even though it’s not my first choice, I can still listen to a power metal album every now and then and enjoy it. END_OF_DOCUMENT_TOKEN_TO_BE_REPLACED

Whilst David T. Chastain may not be one of the more well-known metal guitarists, his works are abundant proof that popularity and proficiency are completely independent functions in the world of heavy metal. His early albums from the eighties with Leather Leone are amongst my most played albums in my library. I never familiarised myself with his works after Leone left the band, but was pleasantly surprised to learn that she had rejoined him in 2013 for the Surrender to No One and then again for We Bleed Metal. END_OF_DOCUMENT_TOKEN_TO_BE_REPLACED

This is the most recent album of a rather obscure metal band who released their incredible debut, Irae Melanox, in 1988. The band disbanded after this, and reformed after the turn of the century to record three more full length albums. After Opus was finished, they disbanded, leaving this as their final musical statement. For those of you familiar with Adramelch, you know that their debut album was a stellar example of progressive power metal in every sense. If you came here expecting the same, you will possibly be disappointed. END_OF_DOCUMENT_TOKEN_TO_BE_REPLACED 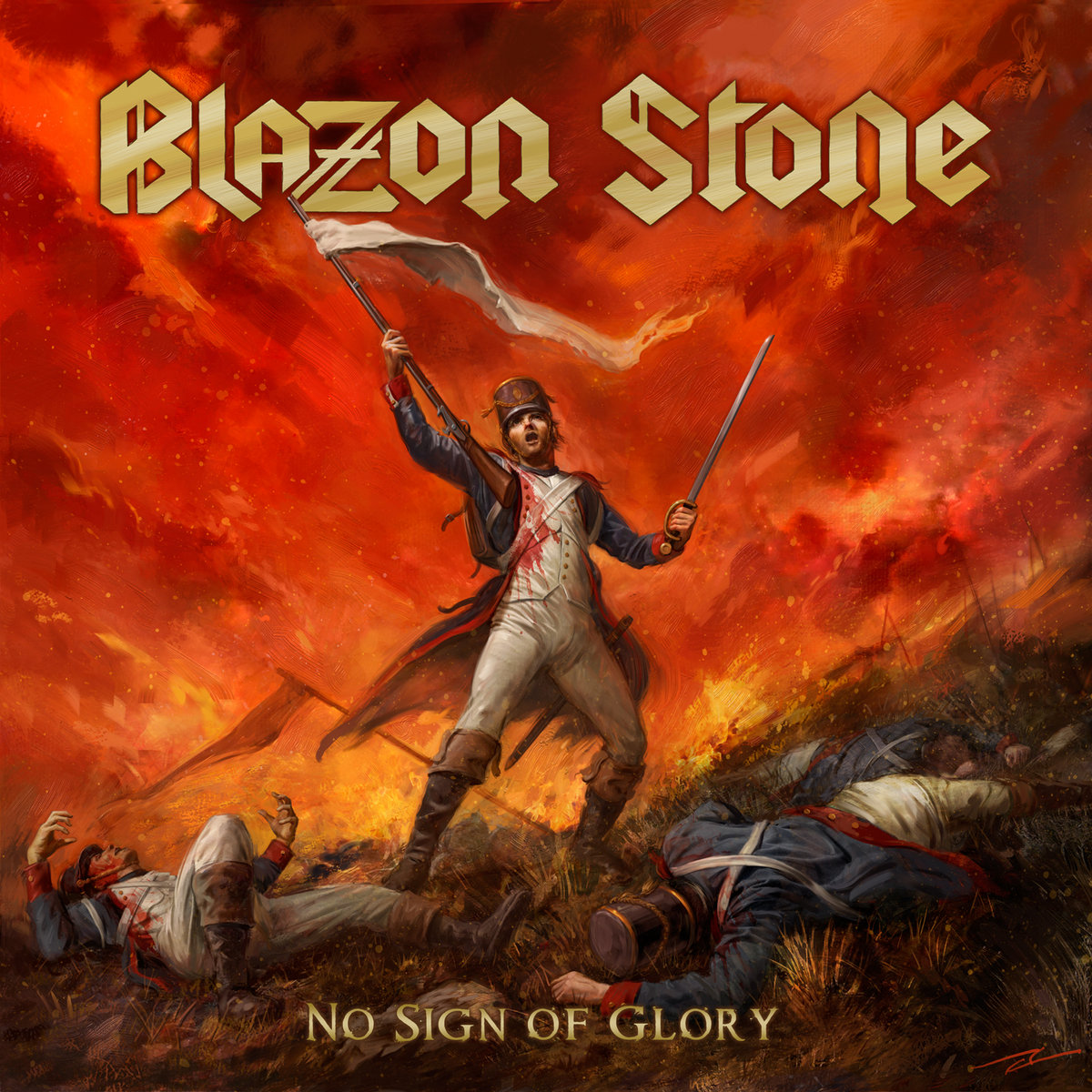 Forget Alestorm if you like pirates, Blazon Stone is the real deal. No Sign of Glory is the second album of Blazon Stone, a side project of Cederick Forsberg whom some of you may know as the guitarist of Rocka Rollas. And you probably guessed it, there is a reason this project is named after one of Running Wild’s triumphs. After the debut Return to Port Royal (also referencing Running Wild’s Port Royal), which was praised by many fans as the album Running Wild never released, No Sign of Glory takes the worship into the second round and let me tell you something, there definitely are more than enough signs of glory to be found here! END_OF_DOCUMENT_TOKEN_TO_BE_REPLACED

I stumbled across this Zandelle album whilst reading through a list of releases and was intrigued by the description I found on last.fm which described them as a band that “successfully bridges the gap between epic US Metal and European melodic metal.” Now, this is a pretty strong statement. I’m not much of a European power metal listener, but I certainly can appreciate the sound and the overall ethos of the genre just fine. I love epic US power metal though, and have spent a good bit time delving into that genre, so this at least deserved a listen. END_OF_DOCUMENT_TOKEN_TO_BE_REPLACED

Wow, Stratovarius, huh? They’re still at it. It’s been 26 years since their debut, and they’ve churned out 15 albums. Eternal is their sixteenth album! That’s mad to think about. That’s the same number of albums as Iron Maiden, although obviously Maiden started nine year earlier. It’s right to say that Stratovarius is legendary in the eyes of many metal warriors. However, like many long-lived bands, Stratovarius’ career has been through its fair share of ups and downs. As a fan of Stratovarius and European power metal as a whole, I’ve always tried to give an open ear to their new albums. I will say that the sound they landed on for 2013’s Nemesis was awesome! It was a great album from them, really launching them into the modern era of power metal. On Eternal, they have pretty much continued this sound. However, I find this album to be rather hit and miss, and its inconsistency really detracts quite strongly from the album as a whole. END_OF_DOCUMENT_TOKEN_TO_BE_REPLACED

I’m not sure where to begin with this one. Angel 7 are an interesting band because whilst they are very clearly a metal band, I don’t really know where on the spectrum to place them. And this isn’t some statement of insane originality on their part or some ground-breaking sound or anything. It’s just that it’s really tough to pin them down. I would say first and foremost that they are a power metal band. They have the heavy double kick drums, fast and driving riffs, epic solos, and on overall punch that would land them squarely side-by-side with any European power metal band. END_OF_DOCUMENT_TOKEN_TO_BE_REPLACED