Here are a handful of full-length releases that fall somewhere in the spectrum of black/speed/punk released over the course of this year. These records are meant to played at high volume as soundtracks to destruction. END_OF_DOCUMENT_TOKEN_TO_BE_REPLACED

Arpitanian Lands is the fourth full length album from Italian black metal band Enisum, although I believe that the first two albums were more like demos, being independently released way back in 2006. They seem to label themselves as ambient black metal, but I pretty much disagree, since this album is very clearly an atmospheric black metal album along the same lines of this year’s Homeward Path by Vallendusk. In fact, I am just going to draw that comparison right off the top. Enisum and Vallendusk are not exactly the same, of course, but their straight-forward approach to atmospheric black metal is somewhat of a breath of fresh air. The same things I really enjoyed about Homeward Path are present here on Arpitanian Lands. END_OF_DOCUMENT_TOKEN_TO_BE_REPLACED

Wow has Spectral Lore ever been busy these past few years. Starting in 2012, they have released a string of monstrous pieces. Starting with their third LP, Sentinel, my personal introduction to Spectral Lore, then following with two splits, the better of the two being the mind-blowing Sol, a concept album about space where Spectral Lore and the equally space-y Mare Cognitum each wrote one track and then co-wrote a third. To follow this up, there was the brilliantly titled III, their fourth album (obviously), which was nothing short of a triumph, cutting away some of more ambient work in favor of 90 minutes of pure atmospheric black metal greatness. END_OF_DOCUMENT_TOKEN_TO_BE_REPLACED

Magic Circle are a relatively new doom metal band from Massachusetts and Journey Blind is their second full-length album. I not familiar with heard their debut, so I can’t provide any context or comparison there, but fortunately in this case, I hardly think it’s necessary. I say this because this release is easily one of the best doom metal albums I’ve heard this year and if there is any “sophomore slump” going on here, I would be quite surprised. Hearing this album is enough to make me want to pick up their debut already. END_OF_DOCUMENT_TOKEN_TO_BE_REPLACED 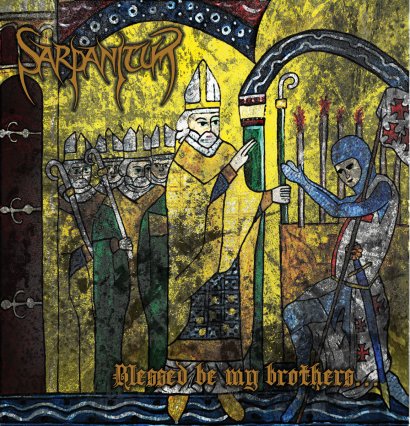 Album: Blessed Be My Brothers

Blessed Be My Brothers was released much earlier this year, and after my first few listens I completely discarded the notion of considering it highly. It was not a bad album on my first try, on the contrary, it was extremely competent and well done but to me it felt overly technical and dependent on melodic interludes to communicate its musical fervor. Keeping it in mind, I put it aside for other death metal releases in the coming year. END_OF_DOCUMENT_TOKEN_TO_BE_REPLACED

Unsure of what record I would next dedicate the time to review, I turned to a reliable weekly list of new releases to see what genres were on offer. I passed over a doom/sludge record, a few brutal death and a speed/punk until my eyes caught upon the label ‘electronic death metal’. I felt my tongue grow uneasy in my mouth. I swallowed hard, but my throat was dry. My pupils constricted and my neck pulled backwards. Such is the reaction many of us have to Morbid Angel’s ‘Illud Divinum Insanus’. However, curiosity overwhelmed me and I followed the heresy-crumb trail to Coraxo’s official webpage, which featured glowing reviews from sources I couldn’t rate less. END_OF_DOCUMENT_TOKEN_TO_BE_REPLACED

If you haven’t checked out this year’s Moerae yet, do so. It is a three-way split between Vacantfield, End, and today’s band, Awe. Three mega tracks around the same theme, this album is pretty crushing black metal from three relatively unknown acts. Which brings me to Providentia, the debut album from Awe. They released the Moerae split way back in March, but I’m guessing they did so as a taste of what was to come. END_OF_DOCUMENT_TOKEN_TO_BE_REPLACED